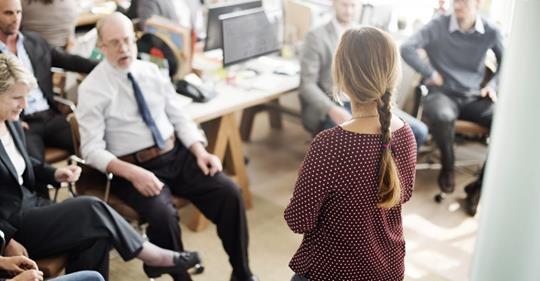 What if, as a society, we didn’t rely on the victims of sexual harassment to change the system? What if we change the paradigm to put the responsibility on those with power and control? Barrister and President of NSW Women Lawyers Association, Larissa Andelman, asks.

It is valiant to admit that despite our best intentions we have failed to curb sexual harassment in workplaces. The number of women who say they have experienced sexual harassment at work has increased from the first survey conducted by the Australian Human Rights Commission in 2003 from 41 percent to 61 percent in 2018.

Accounting for increased media coverage and the #MeToo movement, it might be said that some of that 20 percent increase is the recognition that the conduct is unlawful but, on all measures, there remains the fact that most women are likely to be sexually harassed at work and there is a pervasive fear of reporting the conduct by the victim or by other persons who witnessed the conduct.

The most common reason given for not reporting the harassment is fear of retribution or other adverse conduct by the alleged perpetrator or the employer. In 2018, 20 percent of respondents who reported being sexually harassed said that their complaint had a negative impact on them.

In 2012 the figure was 29 percent (22 percent in 2008 and in 2003 it was 16 percent). These statistics are supported by a significant body of work that suggests that placing the burden of complaining and dealing with the complaint making process on the alleged victim is a reason why persons choose not to make complaints.

What if we, as a society, didn’t rely on the victims to change the system? What if we change the paradigm to put the responsibility on those with power and control?

We do this in so many other areas of work and public life. The legal concept of ‘vicarious liability’ means that an employer is ultimately held responsible for the acts of employees and shouldn’t the employer have a duty to take active and positive steps to ensure that employees act respectfully to one another in a safe environment?

Employers can take this practical step today: they can introduce a policy that requires people who hold leadership positions and those who supervise staff who observe an act of unacceptable, offensive or unlawful behaviour to report it. Leader-based bystander models work by involving and training of ‘leaders’ who are in senior roles who make a commitment to act as active bystanders and educate other senior employees.

The words of Chief of the Army, Lieutenant-General David Morrison in 2013 “the standard you walk past is the standard you accept” places in stark relief the responsibility of leaders in breaking the culture of silence and normality as to the prevalence of sexual harassment in the Australian Defence Force.

Research suggests that for such a policy to be effective and successful, it must work on effecting change on three levels.

First, to individual attitudes and beliefs. Individuals conform to peer-group norms and pressures and individuals are obedient to perceived authority or leadership.

Second, workplace norms and culture. Workplaces are an ideal environment to challenge the norms of violence against women because they are hierarchical organisations and there is a requirement to comply with laws and regulations for the safety of all persons. The development of the bystander provision within the broader workplace behaviour policy must be comprehensive, involving skilled facilitators conducting face to face skill-based training as opposed to education-based training. Training has been identified as a critical factor in preventing sexual harassment, as opposed to policies on sexual harassment which do not make any difference to the levels of sexual harassment experienced.

Group norms have a highly significant influence over individual norms and behaviour. Fundamentally, the employer must convince the employees that harassment against women is not condoned or tolerated and that active bystander attitudes are supported and rewarded. This must occur through formal policies but more importantly, through informal workplace culture from the top of the hierarchy, with buy-in from middle management.

Also, sexual harassers are deterred if there are active bystanders and are less likely to take the risk of offending if the risk is high and the consequences are significant.

Third, the broader role of the community and society and the place of the individual within it is also critical. In 2019 we look forward to law reform. There is currently a review of the Sex Discrimination Act 1984 (Cth) and political leadership will be required to move to a position where it is accepted that eliminating sexual harassment is everybody’s responsibility.

is proudly supported by